Beirut after August 4: Damages and Insights

Following the devastating explosion at the Beirut Port on August 4, the Beirut Municipality sent a call to local engineering companies, including Dar, to volunteer in supporting efforts to survey the widespread damages. In response, Dar deployed a team of close to 100 structural engineers and architects to conduct a swift building condition assessment based on external visual inspection.

The surveys and assessments were primarily focused on major infrastructure, public facilities, and buildings, including those with heritage value. Efforts were consolidated in areas that sustained the most damage (Figure 1). The objective of specialist companies like Dar was to survey and assess damages in order to help stakeholders organise and prioritise the rehabilitation and reconstruction works and manage and allocate donor funds accordingly. The findings of the report presented a devastating picture.

Over the course of a few weeks, Dar’s survey team covered around 7,000 building lots in the following districts :

The main objective of the investigation was to detect the type and extent of structural damages based on international codes of practice in order to categorise the buildings that remain safe for occupants after the explosion, the ones requiring immediate support and strengthening measures, and those needing partial or total demolition and reconstruction. The survey also covered an assessment of the extent of building façade damages in terms of glazing and cladding quantities.

Within the impacted areas surveyed by Dar, initial assessments showed that damages vary depending on the type of structure involved (Figure 2). For example, sandstone buildings sustained the highest level of damages while reinforced concrete buildings were less affected from a structural point of view. However, buildings with glass envelopes and facades have been damaged severely and will require reinstallation of glass windows, doors, and frames, especially before winter arrives.

Various challenges are associated with the management of these damaged buildings. For one, damaged facades and any exterior balconies, balustrades, or other features that may have been connected to them must be studied and stabilised to limit the risk of collapse, especially in upcoming rain and wind conditions. For another, there is a concern about debris possibly containing traces of asbestos, a carcinogenic substance that is currently banned but may have been used in older buildings that are now damaged. Waste may also pose other hazards from glass or heavy metals such as lead, mercury, and paint. Ongoing waste initiatives, however, are offering support for waste management.

The explosion dealt a particularly heavy blow to Beirut’s healthcare sector, which was already feeling the pressure of the coronavirus pandemic in Lebanon. An initial rapid assessment of 55 primary healthcare centres within the blast impact radius found that 40% had sustained moderate-to-serious damage, and that only 47% of surveyed facilities could still provide full routine health services (Figure 3). Out of the six major hospitals that are located in the impacted area, three – the Quarantina Governmental Hospital, St. Georges (El-Roum) Hospital, and Rosary (Wardiye) Hospital – had to temporarily shut down and transfer patients to other facilities. Beyond the clear community impact of these damages especially in the time of COVID-19, there is the additional concern of managing any medical waste that could potentially have spilled out into the areas immediately surrounding the damaged hospitals.

A team of Dar engineers also conducted visits to the Beirut Port itself between the 3rd and 21st of September. The purpose of these visits was to obtain a first-hand assessment of the damages and problems facing the immediate reinstatement of port operations, prior to the implementation of longer-term reconstruction/improvements. The visits covered mainly areas with secondary damages, as the most heavily affected “red zone” was cordoned off by the army and, as a forensic site, remained off limits.

As expected, the team observed that many facilities at the port would require extensive rehabilitation or reconstruction. Wet utility networks such as the wastewater lifting station, the vehicle fuel filling station, and the main water pump station sustained heavy damage. Some, such as the wastewater network, must be repaired soon to avoid flooding at first rain (Figure 5).
The cargo bay also sustained heavy damage, but despite the significant losses, the material handling system at the port is still able to achieve almost 50% of its total capacity, as measured before the explosion. For example, the team found that 7 out of 16 ship-to-shore cranes, 28 out of 51 rubber gantry cranes, 37 out of 52 trucks, and four out of 14 reach stackers were still operational while the others required repair and heavy maintenance.

Meanwhile, the steel structures – including the hangar steel structures – were subjected to extensive damages. Blast mitigation for these structures would have required a high redundancy in members in addition to special strengthening for the connections, and the absence of these measures contributed to the massive damages. As it happens, the majority of steel structures experienced total or major collapse in addition to the plastification in materials (Figures 8 and 9). For these structures, it is recommended that the steel/skin volume be removed and replaced by new structures. The associated foundations, concrete grade beams, and slab on grade require in-depth inspections while the concrete pedestals require modification in order to receive new anchor bolts. The same inspections will also be needed for steel structures that sustained partial or light damage (Figure 10). Such will require strengthening and/or replacement for some members and connections.

Moreover, the majority of the outer skins of metal cladded buildings (hangars) are damaged. Most are unusable and unstable and may even pose a threat to public and port personnel with time and with the coming rainy and windy season being unstable and very light. Therefore, it is very important to safely remove what can be removed and temporarily fix what cannot be removed.
It is important to note that due to high instability in the steel structures, these areas must be restricted and people must be prohibited from working there without proper safety measures (Figure 11). Moreover, repair and reconstruction works, when intended, must use materials that meet up-to-date international standards for safety and proper performance, while taking into account considerations such as intended use, fire and life safety regulations, weather performance, acoustic insulation, and all provisions to other utilities.

Restoring the heart of Beirut

The combined volunteering efforts of various organisations and communities have already set Beirut on the path to recovery. With the help of donor countries, new mobile hospitals have been set up, and organisations are already taking on the rehabilitation of various properties and buildings. However, funds are needed to cover the full extent of the damages, and care must be paid to reconstruct in a more resilient, inclusive, and sustainable manner and to ensure that any reconstruction efforts are planned and tailored to the protection of the most vulnerable.

In the coming weeks, Dar will be sharing a city perception report and four white papers outlining our vision for an immediate recovery response and a future resilience plan. The chosen topics – social sustainability restoration, housing sector reformation, creative industry rehabilitation, and public realm reclamation – reflect the most pressing issues that if addressed properly have the potential to significantly enhance the overall resilience of the neighbourhoods. The immediate recovery emergency targets restoring normalcy in the affected neighbourhoods where life has been somehow suspended since the blast while the future plan is for creating a vision for the revival of the area as a whole, one that does not only reconstruct the physical damages of the city but also steps away from previous post-war reconstruction mistakes in order to address the vulnerabilities that existed before and restore the heart of Beirut. 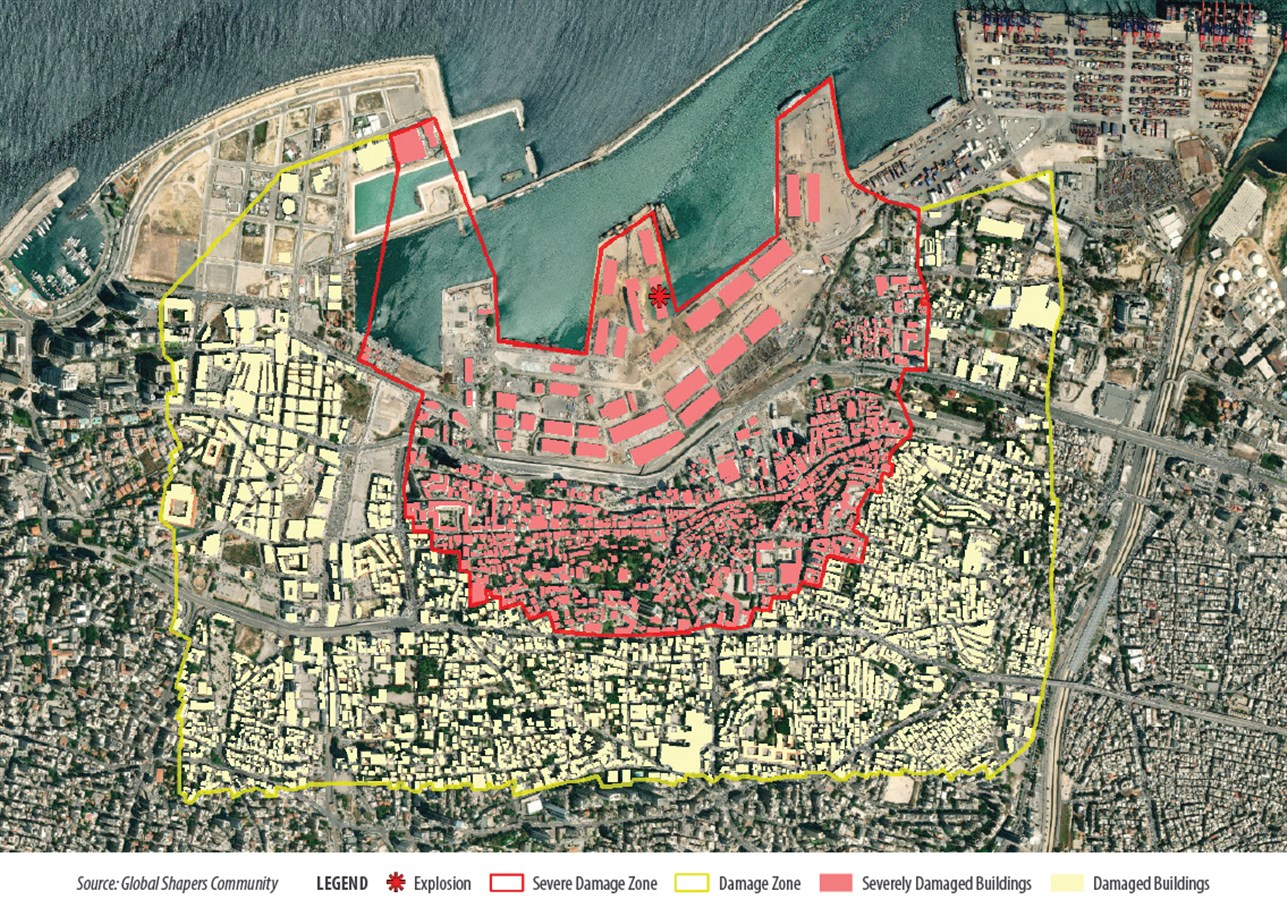 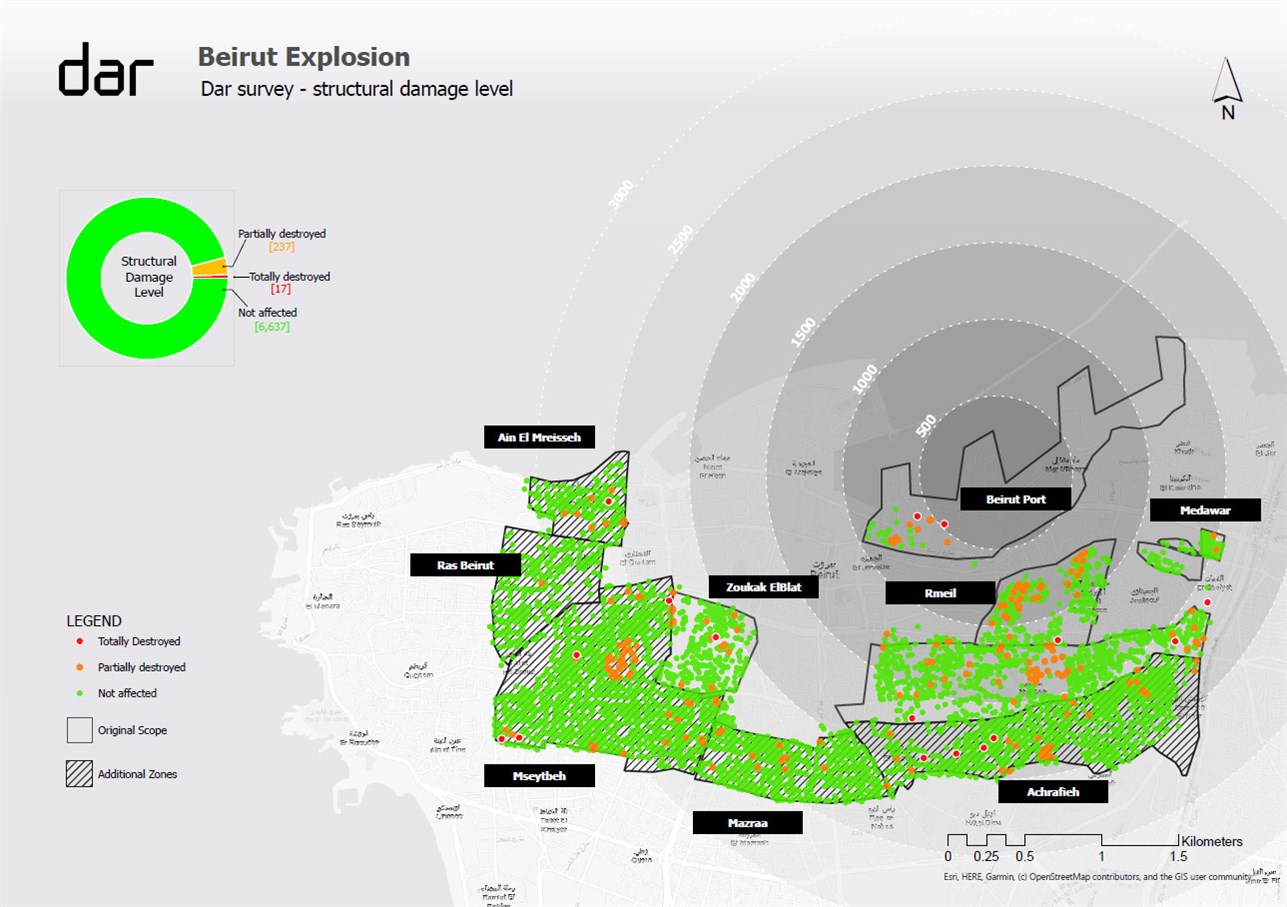 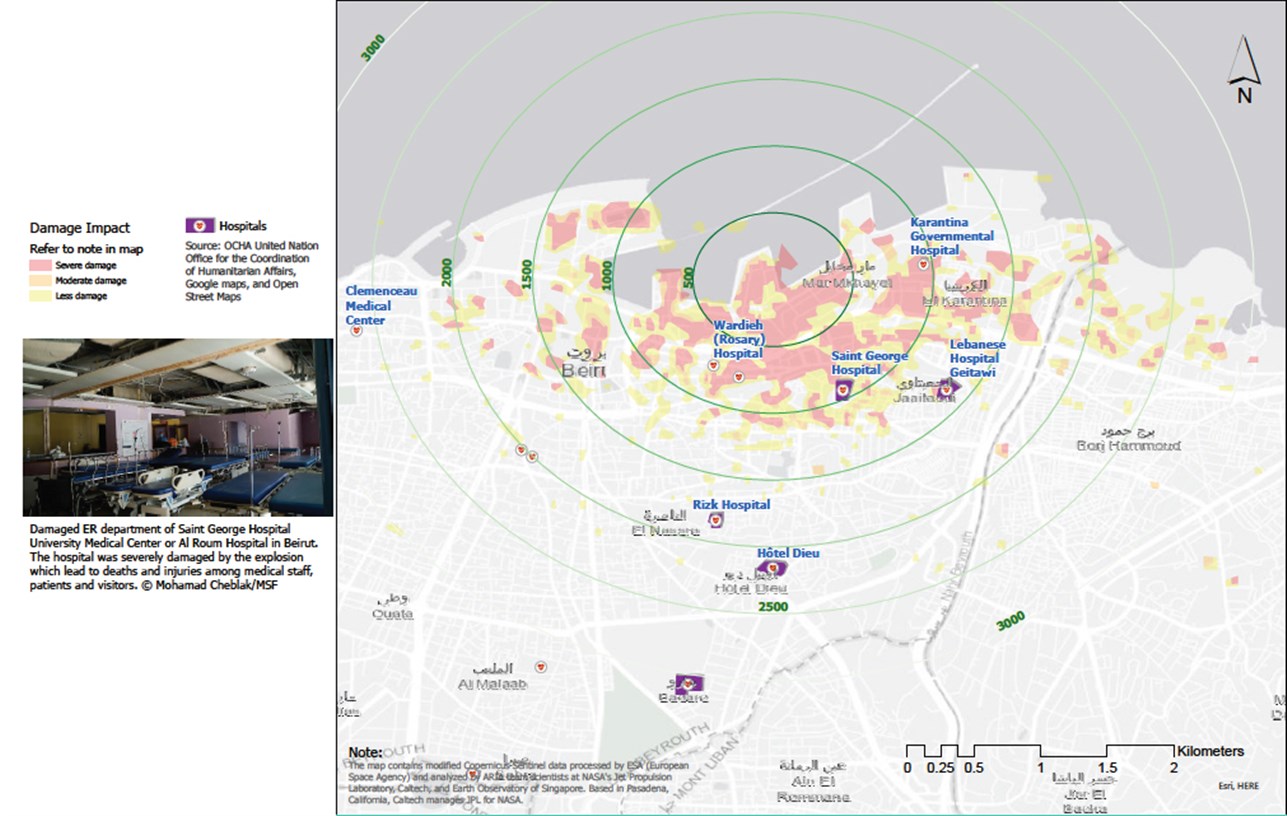 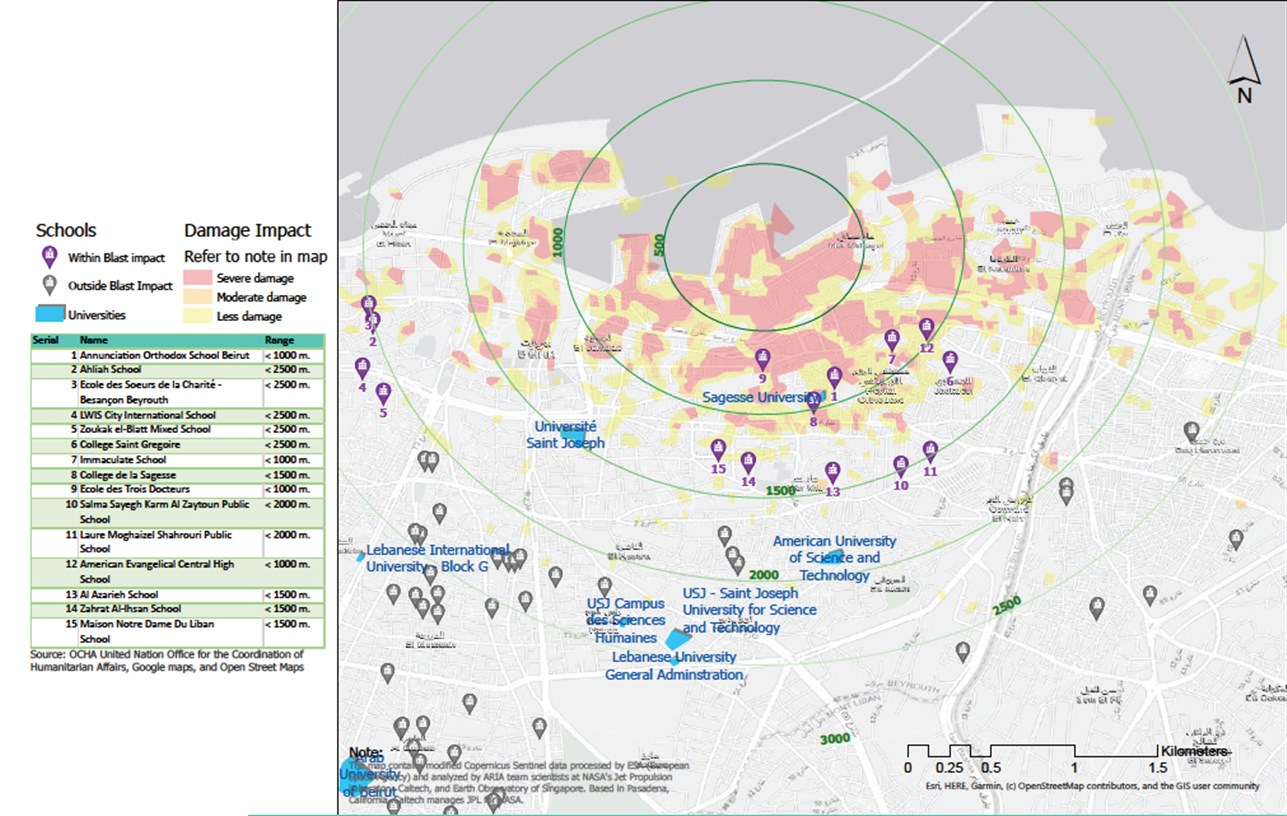 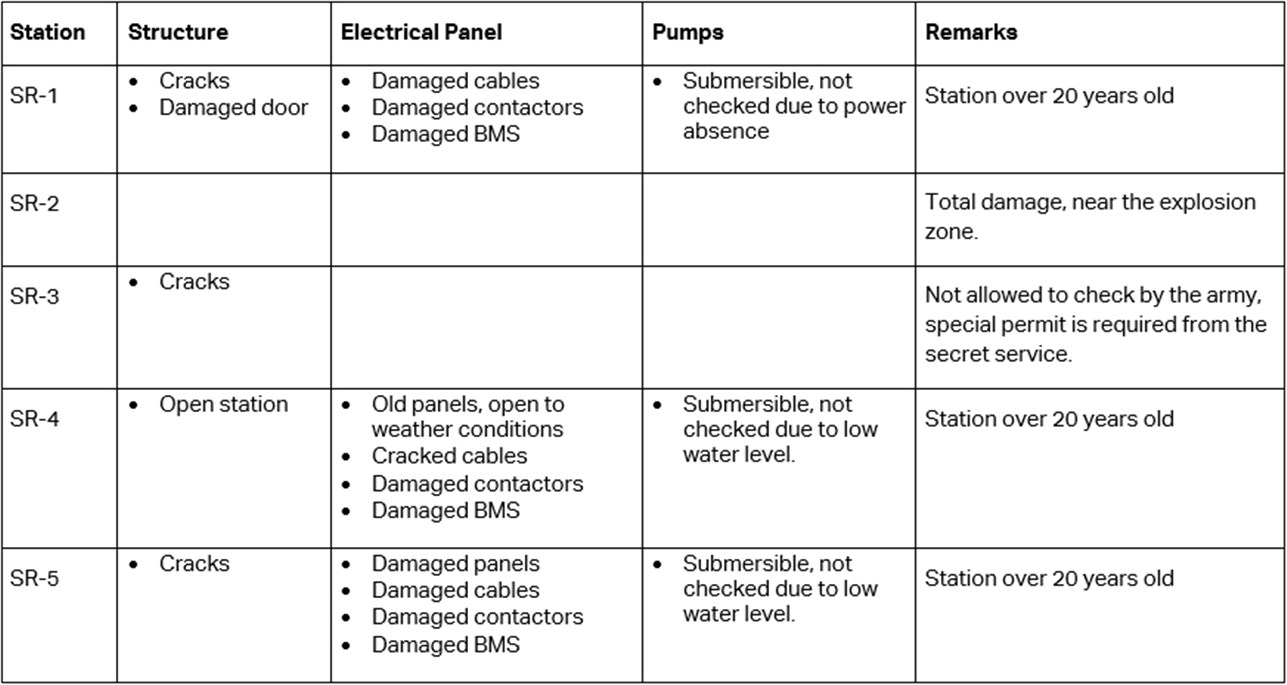 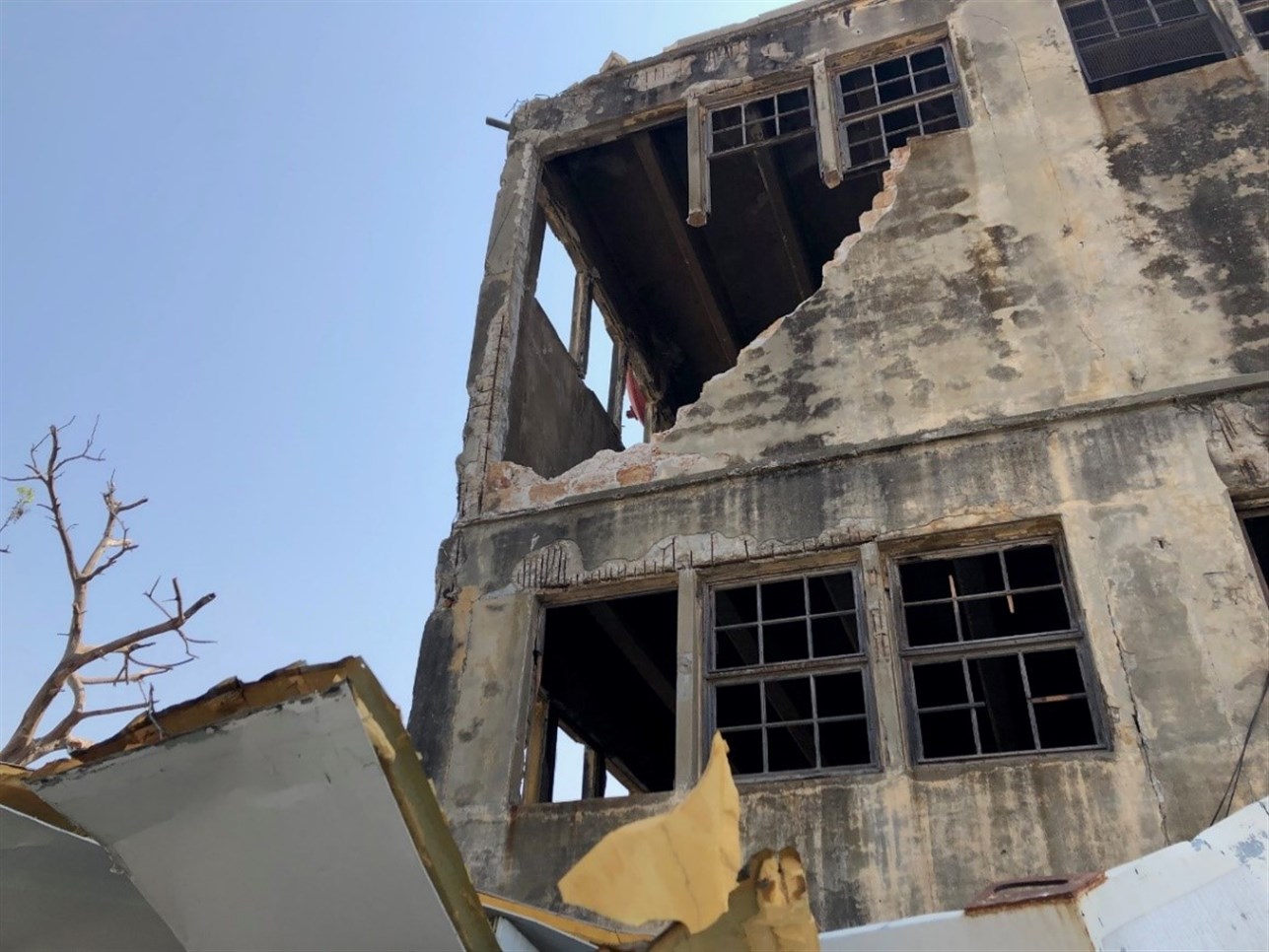 Figure 6: Some of the buildings need repairs (columns, beams, slabs and stairs) due to corrosion in concrete elements 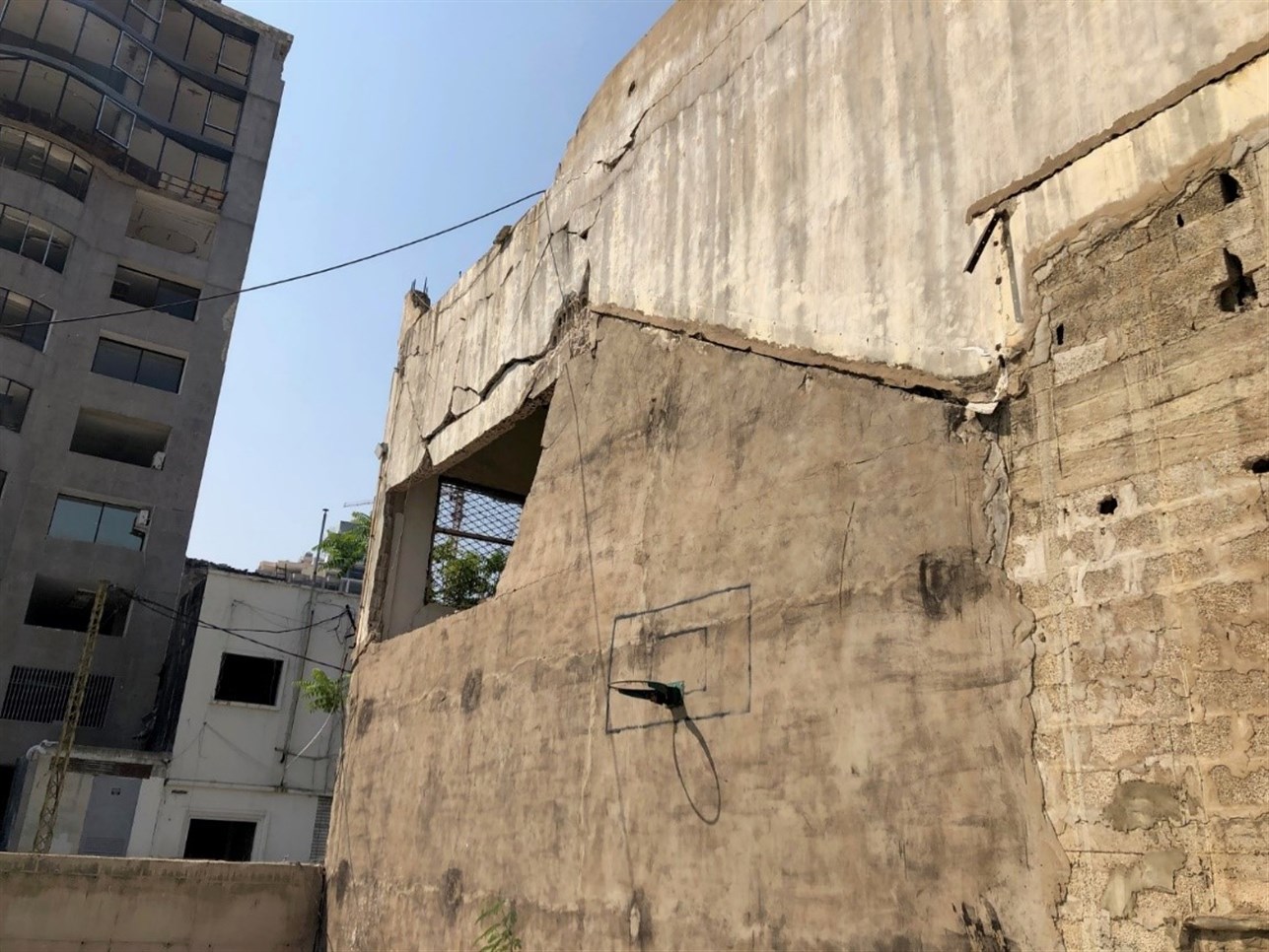 Figure 7: Damage in façade in most buildings due to explosion 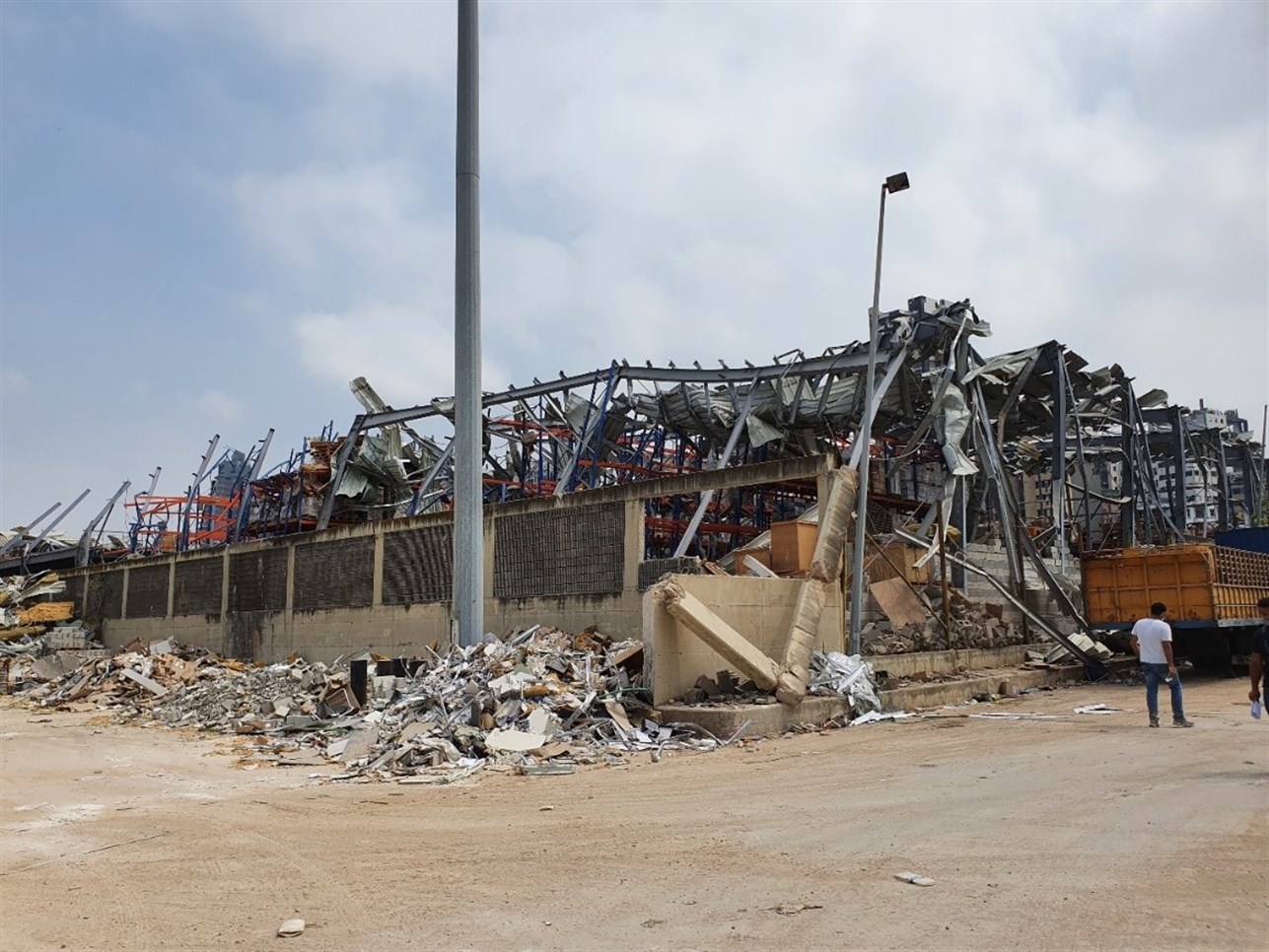 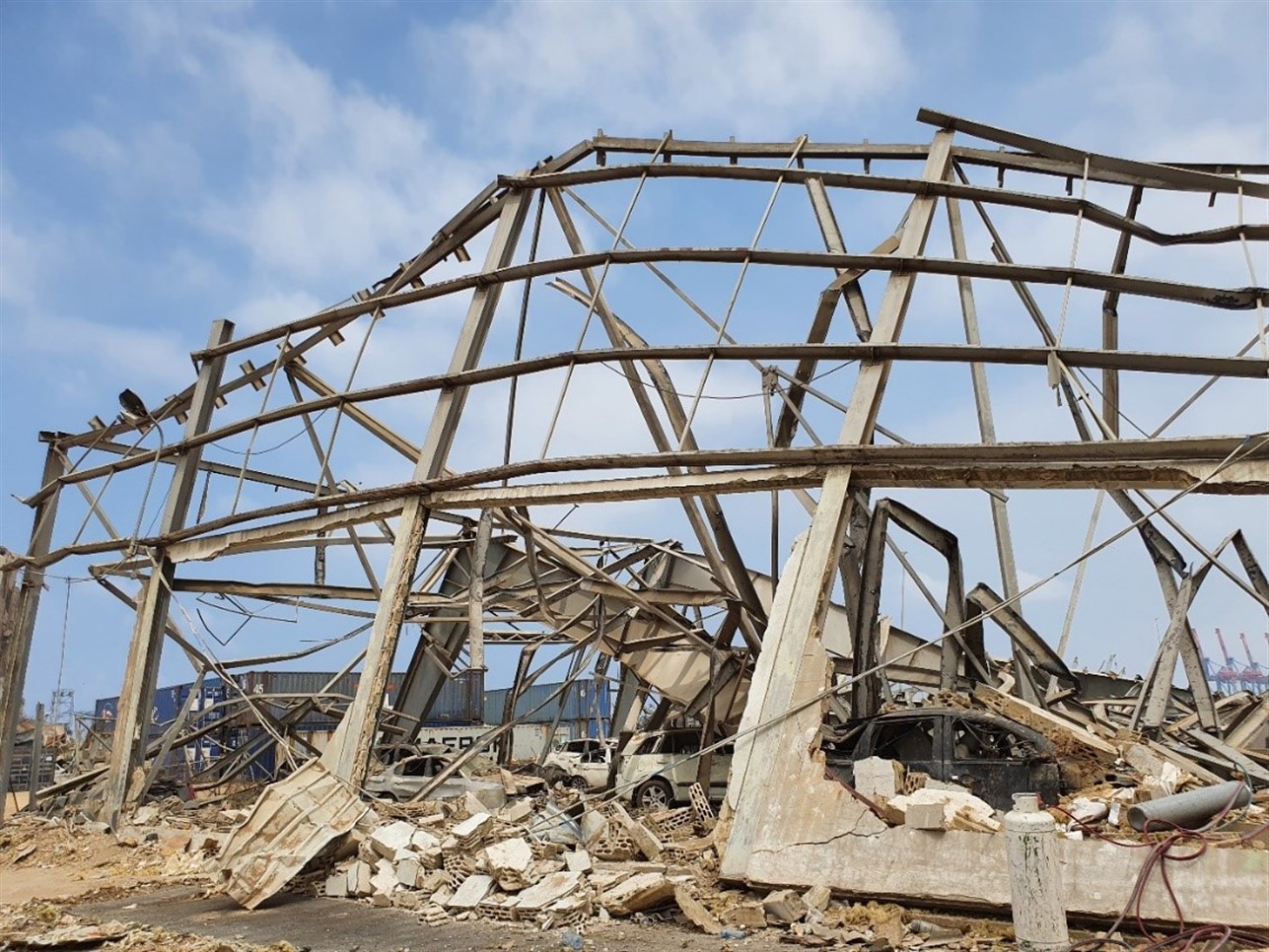 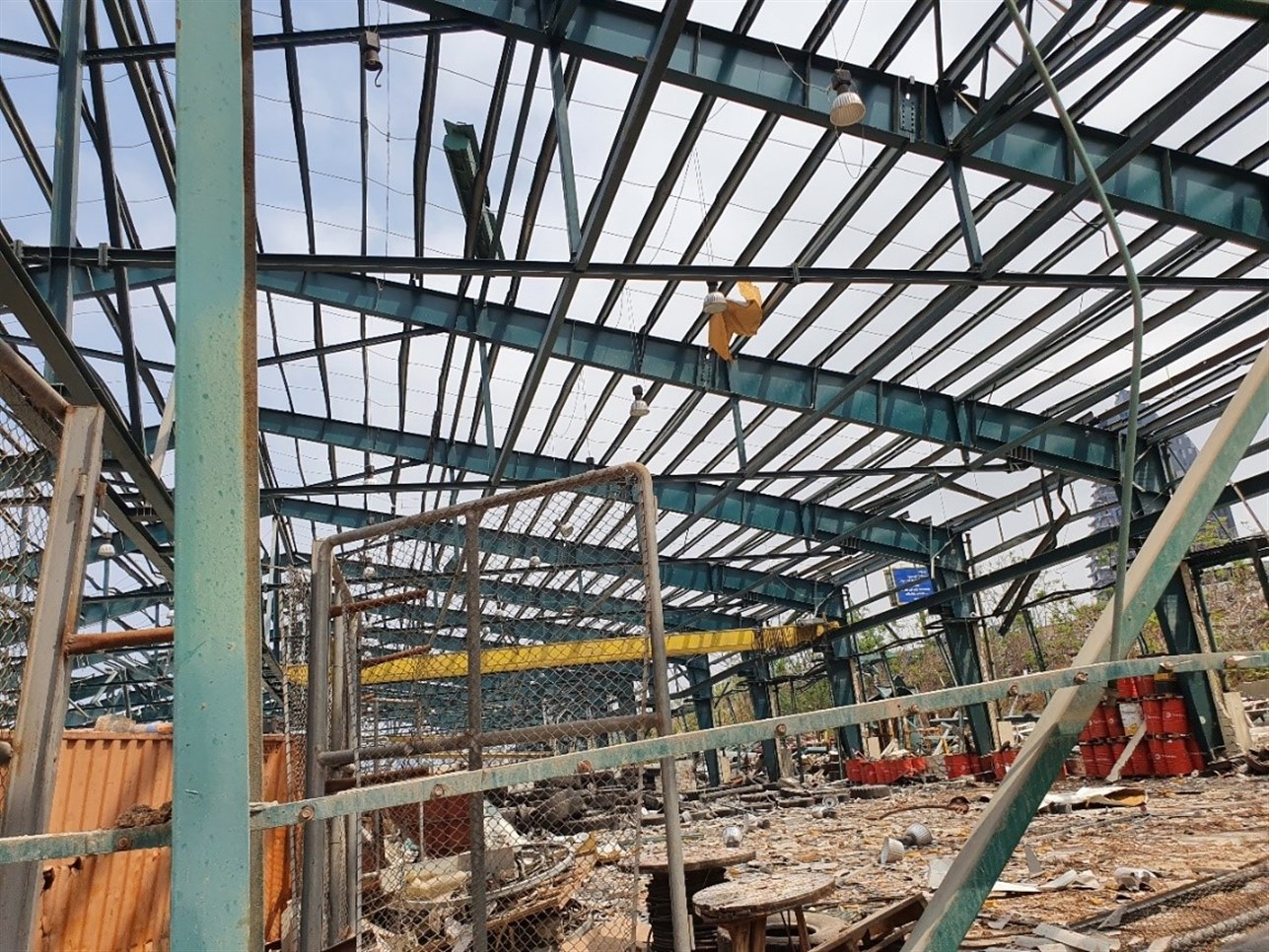 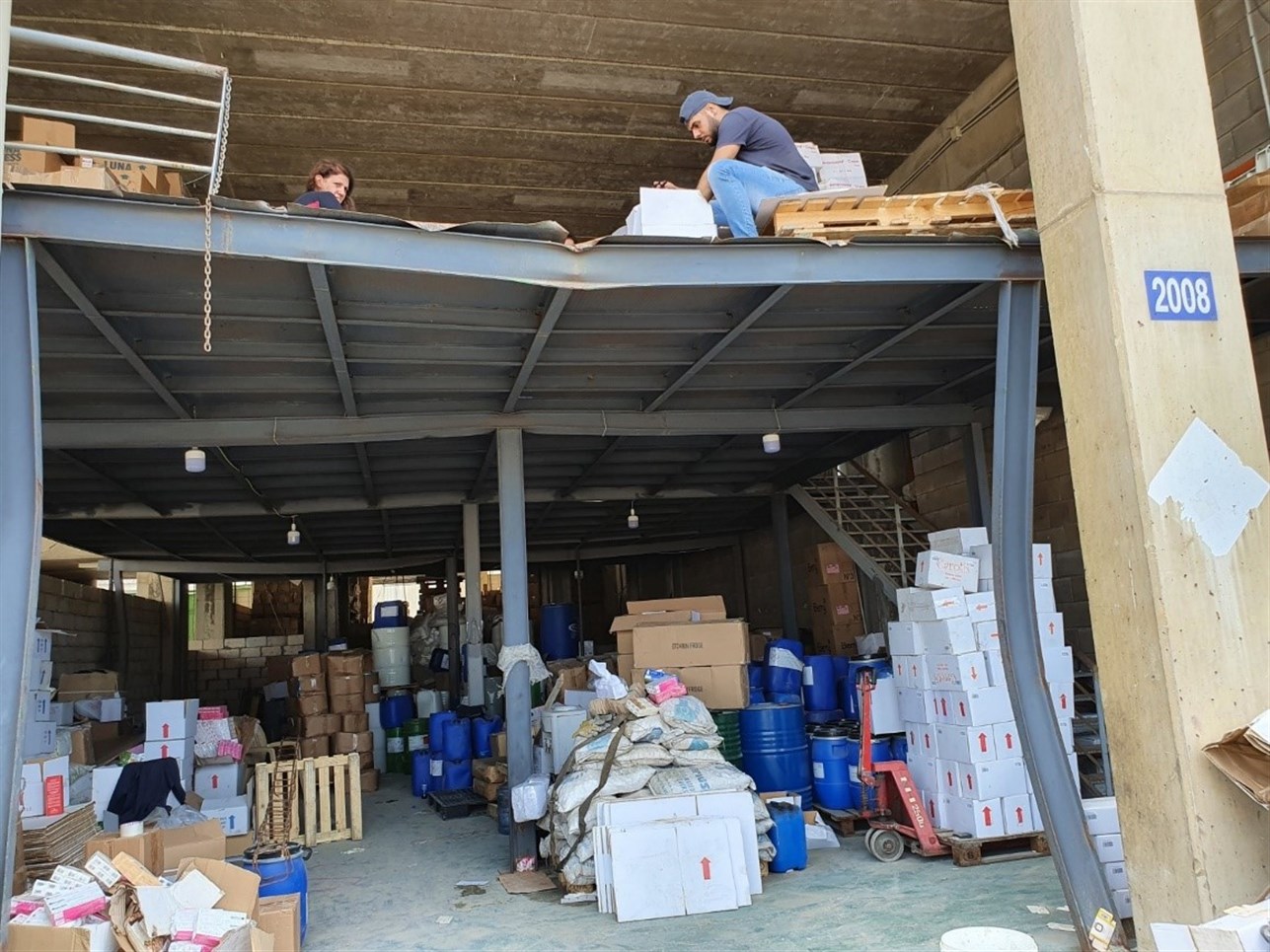