Geotechnical Challenges at the Bosporus 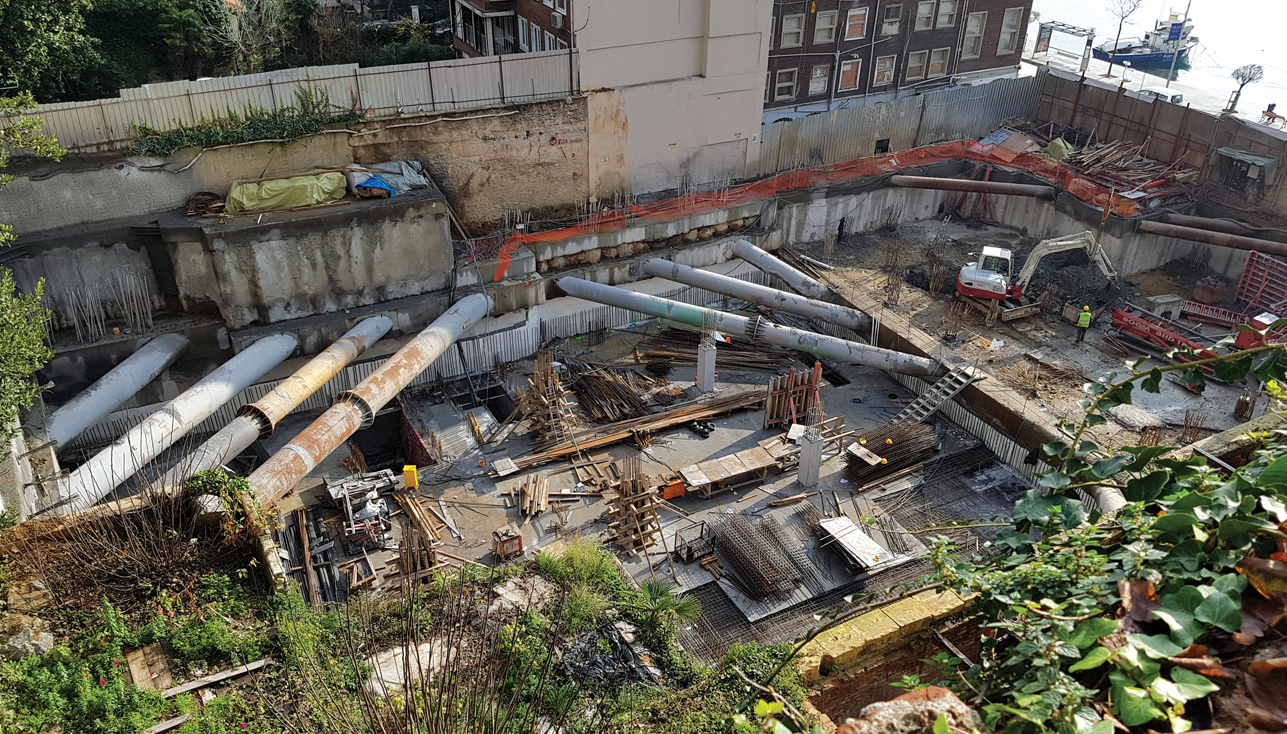 Located in the European side of Istanbul, the project involves the reconstruction of two main mansions named Kocatas and Sait Pasa in the coastal strip bordering the sea way, the renovation of several historical buildings and walls, and the protection of greenery and old trees.

“Soils are made by nature and not by man, and the products of nature are always complex… as soon as we pass from steel and concrete to earth, the omnipotence of theory ceases to exist” - Karl Terzaghi.

The most critical issue of the project was the excavation and dewatering works for the basements of the Sait Pasa and Kocatas mansions. This was due to the presence of deteriorated historical buildings and complex ground conditions within and adjacent to the project site.
In response, a special support and cut-off system was adopted in order to ensure a dry and stable excavation for the basements during the construction period, and to prevent the lowering of the ground water table around the excavation of the Kocatas basement. The objective was to protect both the ground below the neighbouring building and the left wing from potential ground subsidence caused by dewatering and excavation works, and as such to maintain the integrity of their foundations and structures.

As revealed by the site investigation, the thickness of the top soil layer was variable. The difference in the limestone rock head level was attributed to the presence of a structural discontinuity (fault) oriented towards the northeast. The rock was shallow at the location of Sait Pasa mansion; however, it was deep in the western area at Kocatas where the soil deposit was formed of a thick layer of very loose-to-medium-dense sands and soft clays mixed with fine‑coarse grained gravel reaching a maximum depth of about 22 m. Moreover, accounting for the ground seismicity and the high water level at the coastal zone, the soil layer is susceptible to liquefaction for the design accelerations of the Turkish seismic zonation.
The rock cliff/fault passes under the Kocatas left wing building where part of it is on rock and the other part on loose soil.

A special support is an excavation support system used in the absence of available spaces for open-cut excavations. This is done to keep the sides of excavations stable, to minimise soil disturbance, and to avert any damage to utilities in the surrounding ground and to neighbouring structures. The type of the special support wall system can be determined based on the ground conditions.
In our project, the special support system consists of piles (600 mm to 1000 mm diameter) and micropiles (250 mm diameter) socketed in rock. The sides of the excavation are laterally stabilised by a bracing system and by anchors, which are located at least 300 mm above the slab level to avoid interference between these elements during construction works.

A cut-off system is a solution used to reduce the groundwater infiltration from the sides and bottom of excavation when the water table is high. Consequently, the quantity of flow becomes manageable and the water can be pumped to allow construction of the permanent works in dry conditions.
In our case, the water level is very shallow at the coastal zone. Therefore, in order to ensure a dry and stable excavation for the basements of the Sait Pasa and Kocatas buildings, a cut-off system is implemented with the following components:

For the Sait Pasa mansion where the rock is shallow, a raft foundation is adopted with tension micro piles to resist the uplift pressures. The tension micropiles are protected against corrosion by HDPE sleeves filled with grout surrounding the bar reinforcement.
For the Kocatas mansion where the soil deposit is thick, pile foundations (800 mm and 600 mm diameter) socketed in good rock are considered for this structure. During dewatering works, the ground water level under the basements is reduced and the piles carry the loads of the structure in compression mode; after dewatering is stopped, the ground water table rises and part of the piles under the deep basements become tension piles.
The Kocatas left wing’s historic structure is maintained, while a basement is added beneath it by underpinning. The latter consists of sequential excavation and construction of reinforced concrete wells under the existing structure; these wells become an integral part of the basement structure.

Investigations revealed that the northern part of the left wing building is on rock, and its southern part is on soil. A raft foundation is thus adopted, and the soil beneath it is improved by low-pressure grouting works, whereby small machines operate within the narrow spaces of the building. The quality of the grouting works was verified by in-situ standard penetration tests, and as geophysical surveys.
At Kocatas mansion, soil improvement by jet grouting columns was applied between the piles in order to mitigate liquefaction of the saturated loose soil, losing stiffness and strength in seismic conditions. This technique employs high-pressure, erosive jets to break down the soil structure and mix the soil particles with cement-based grouts, forming a treated mass with improved stiffness and strength. Core samples were retrieved from the jet grouted columns by drilling, then tested in the laboratory.

Historical masonry-retaining walls requiring retrofitting are located between blocks B and C, north of Sait Pasa, with an average height of 8 m. The soil behind the walls consists of gravelly silty clay.
According to visual inspections, deep and shallow cracks, deteriorations, erosion, and loss of joint mortar were identified in some parts of the walls. Stability analyses for overturning, sliding, and bearing capacity for different wall sections were also checked in both static and dynamic conditions, considering the wall thickness defined by core samples taken from the walls.
Based on the results, some sections were found barely safe in terms of overturning, sliding, and bearing capacity under both static and earthquake conditions, whereas other sections were declared unsafe in terms of overturning under static loading conditions. The former are stable because of the presence of Block B, which acts as a buttress and provides lateral support to the base of the existing wall.
Based on the results of the stability analyses, the adopted concept for retrofitting walls consists of:

Complex ground conditions and constraints exist at the site of Sait pasa and Kocatas mansions comprising a fault system, variable bedrock depth, liquefiable soil deposits, high ground water with proximity to the sea at the southern site limit, an active seismic zone, narrow space for operating construction equipment, old deteriorated structures at the boundary of the site, and a steeply sloping terrain at the northern site limit with historic masonry walls. All these challenges were addressed and resolved by a variety of geotechnical solutions, as well as continuous coordination between the design and site supervision teams, in order to satisfy the requirements of the project. 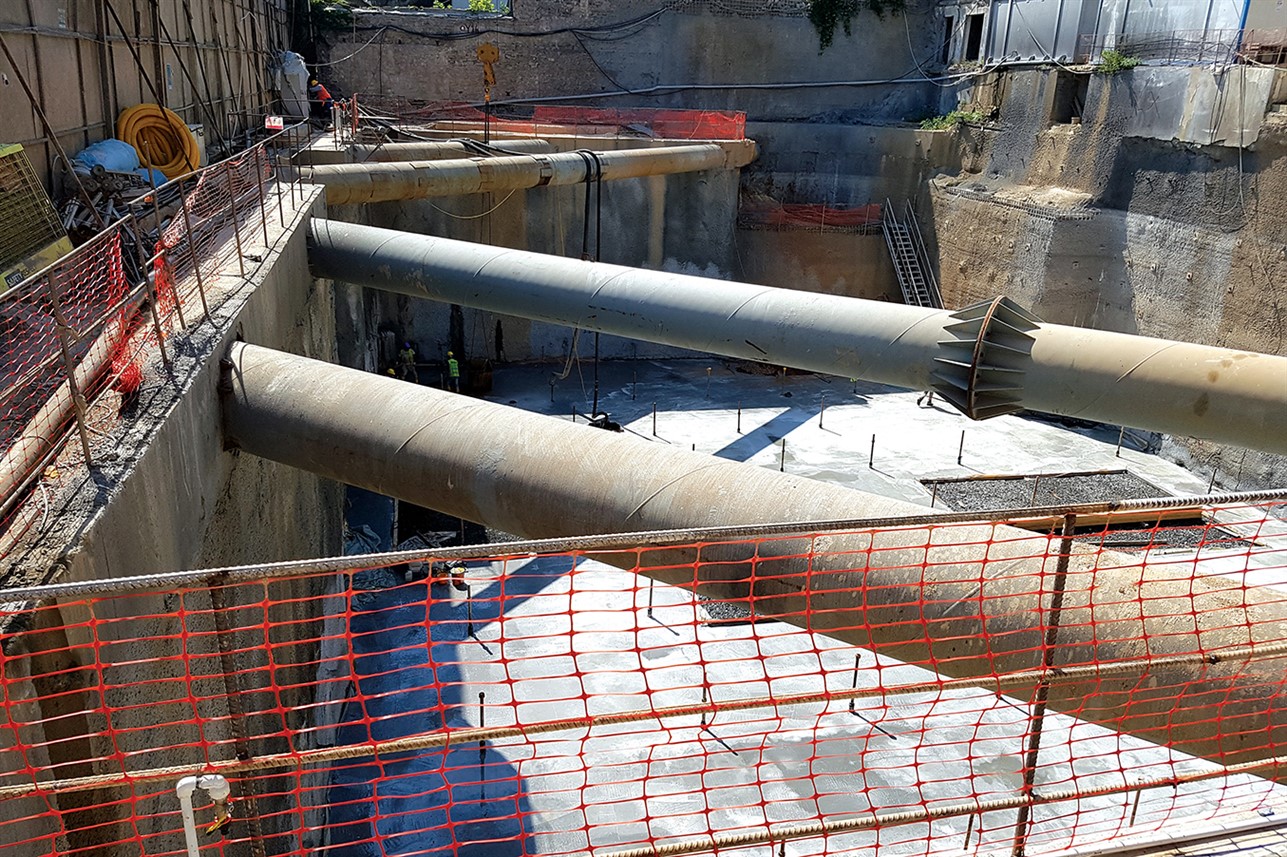 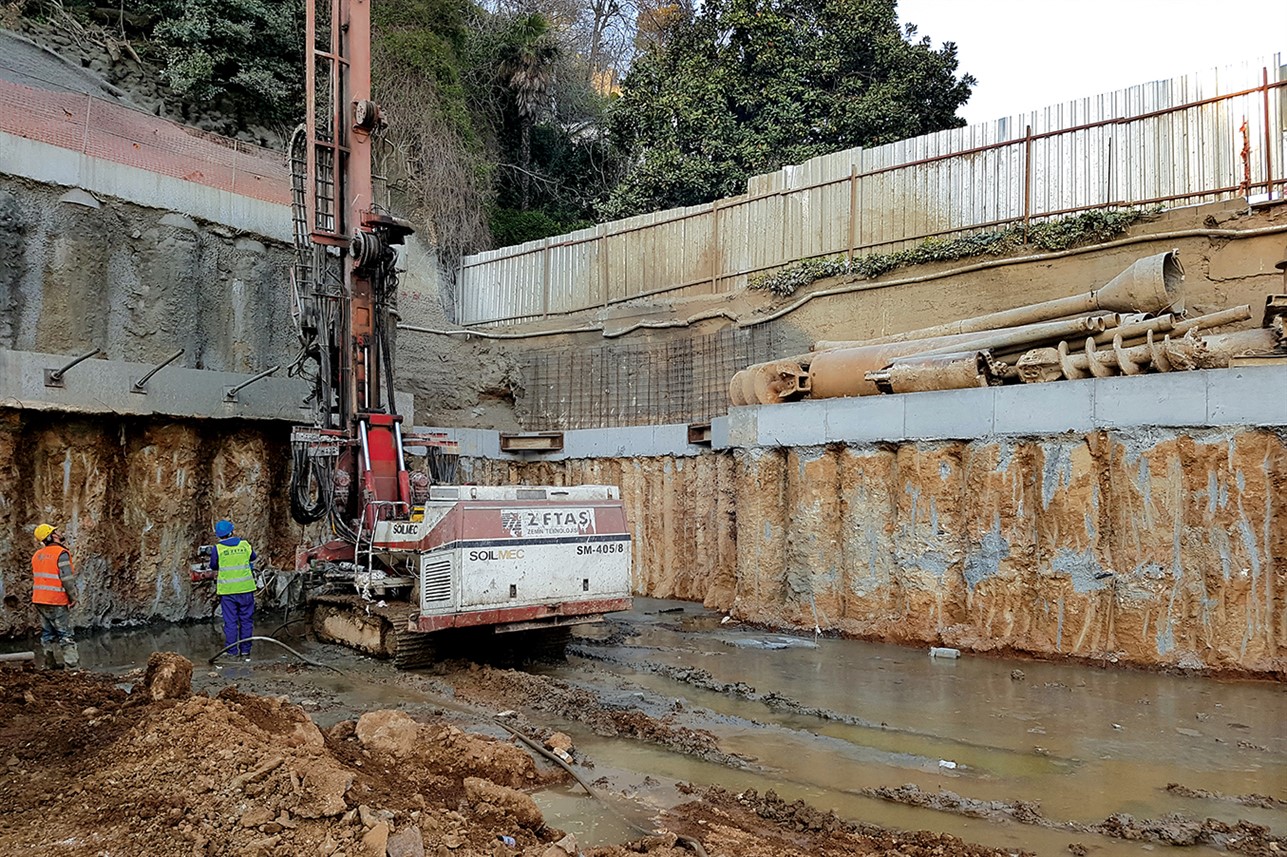 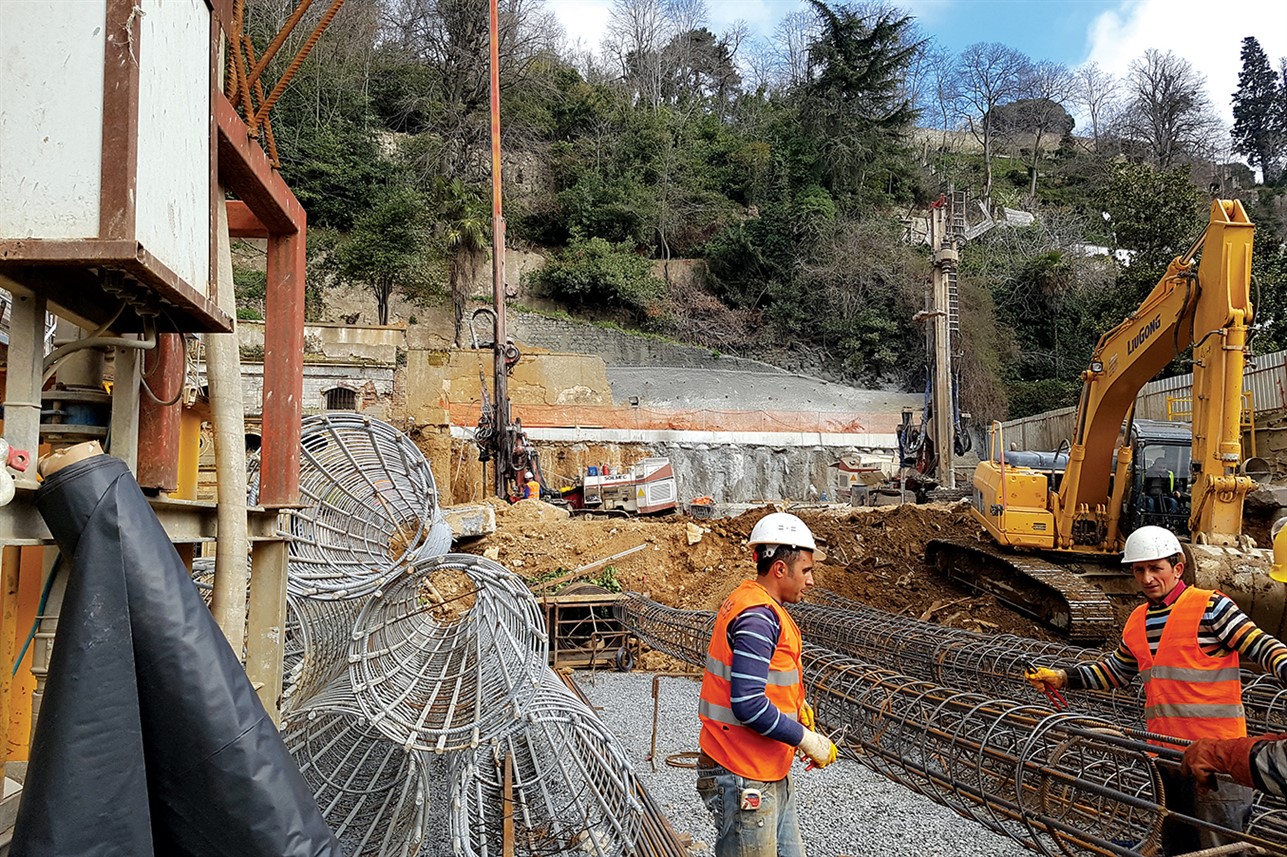 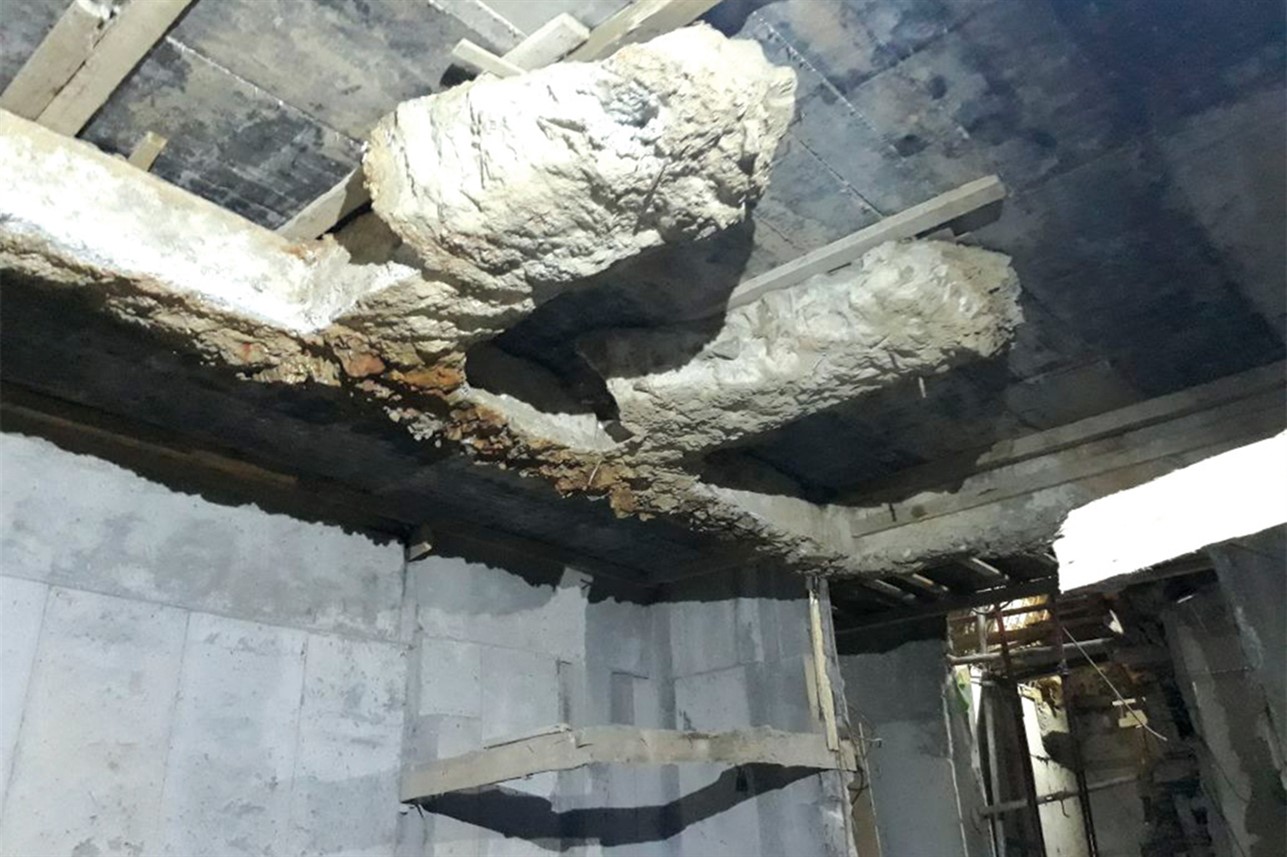 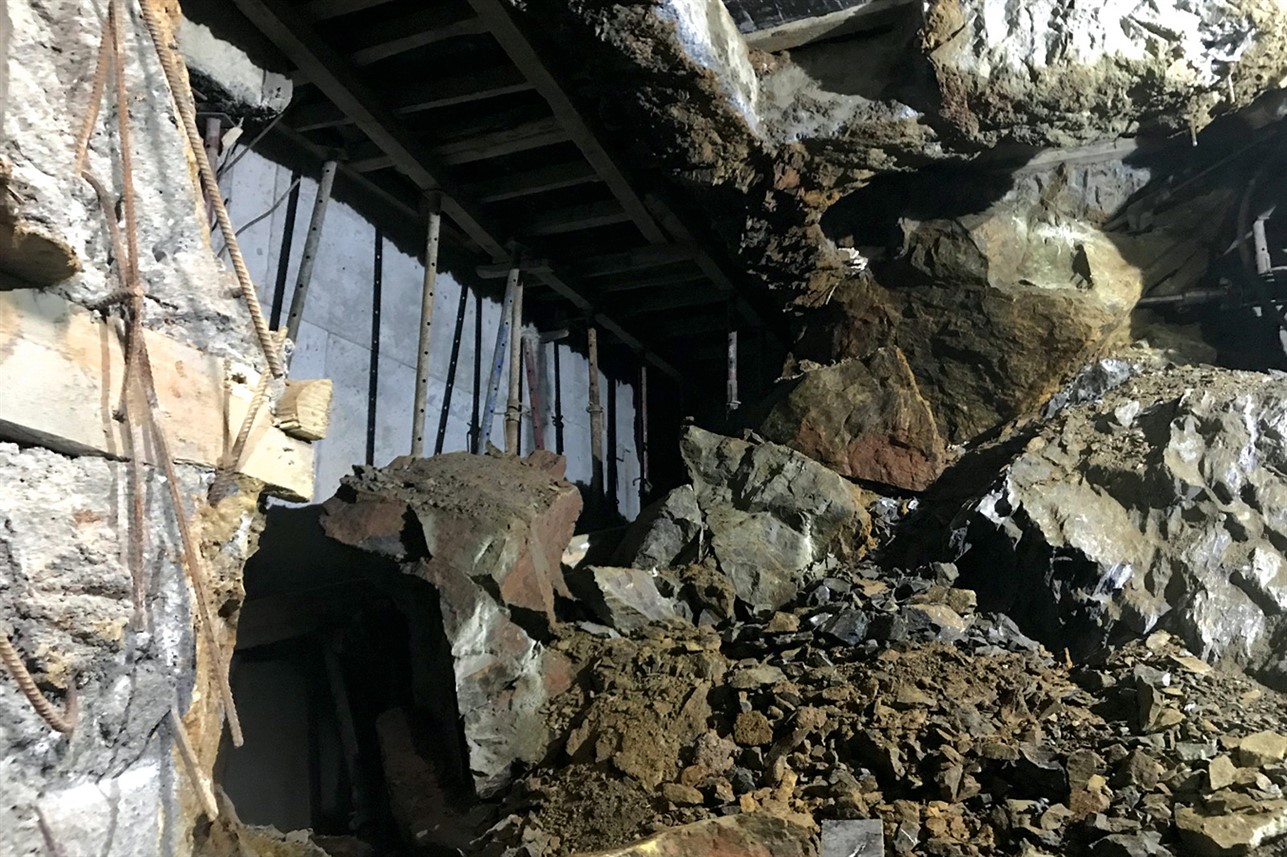 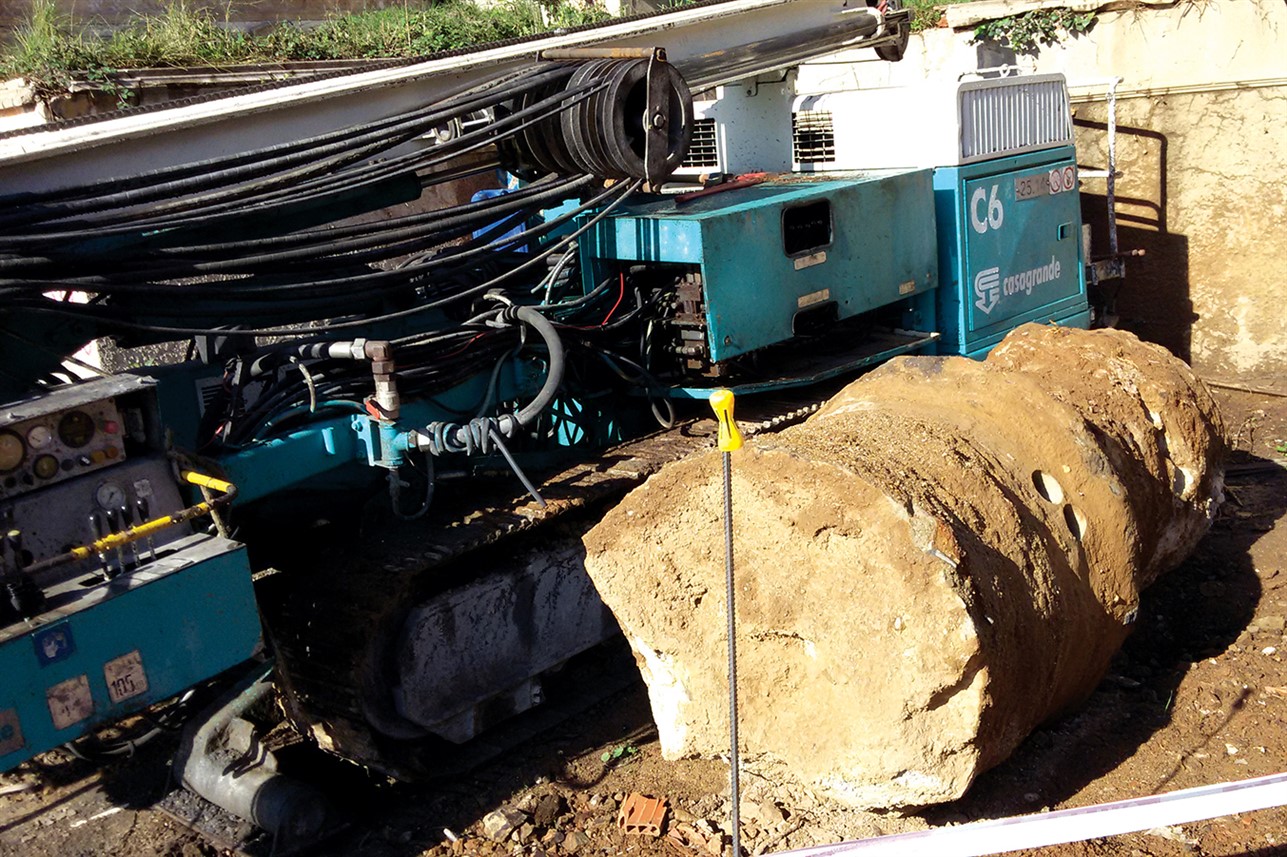 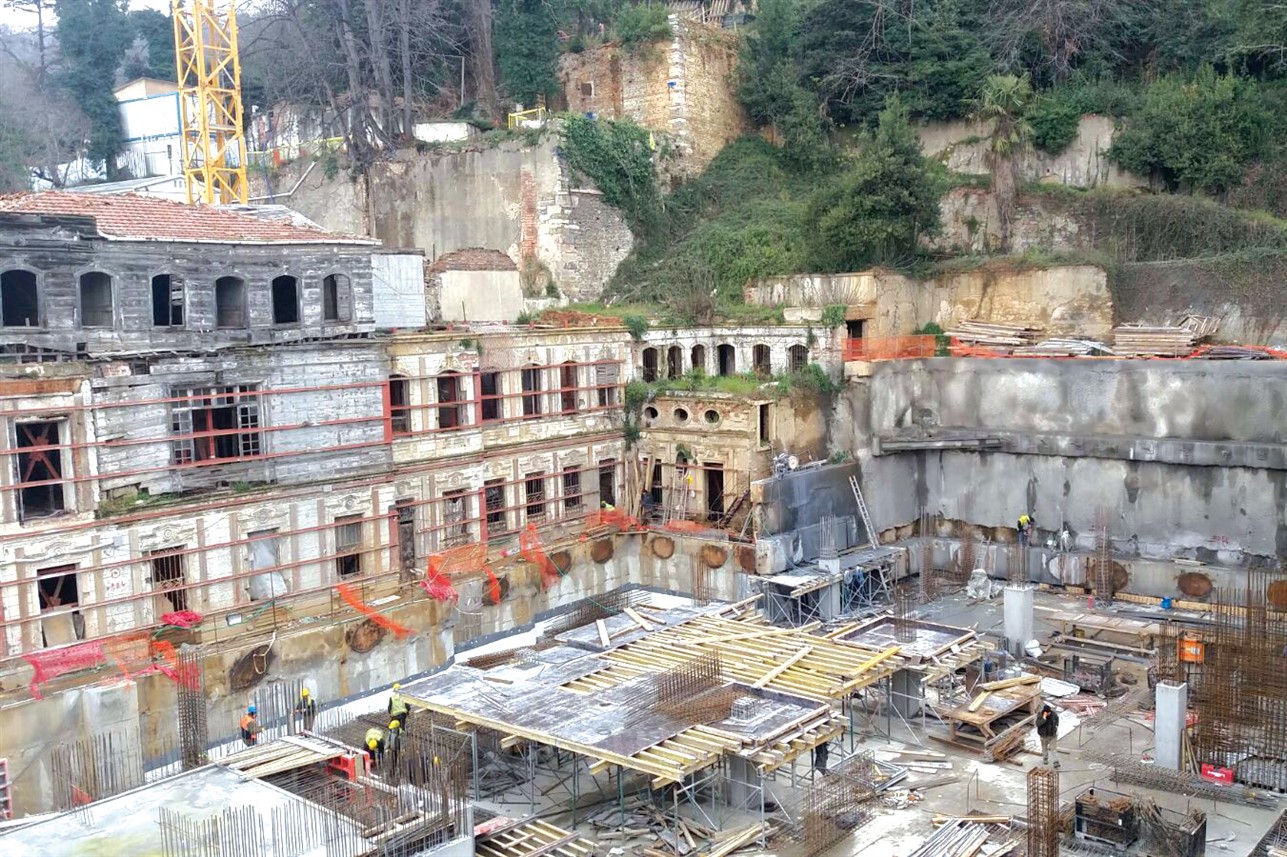 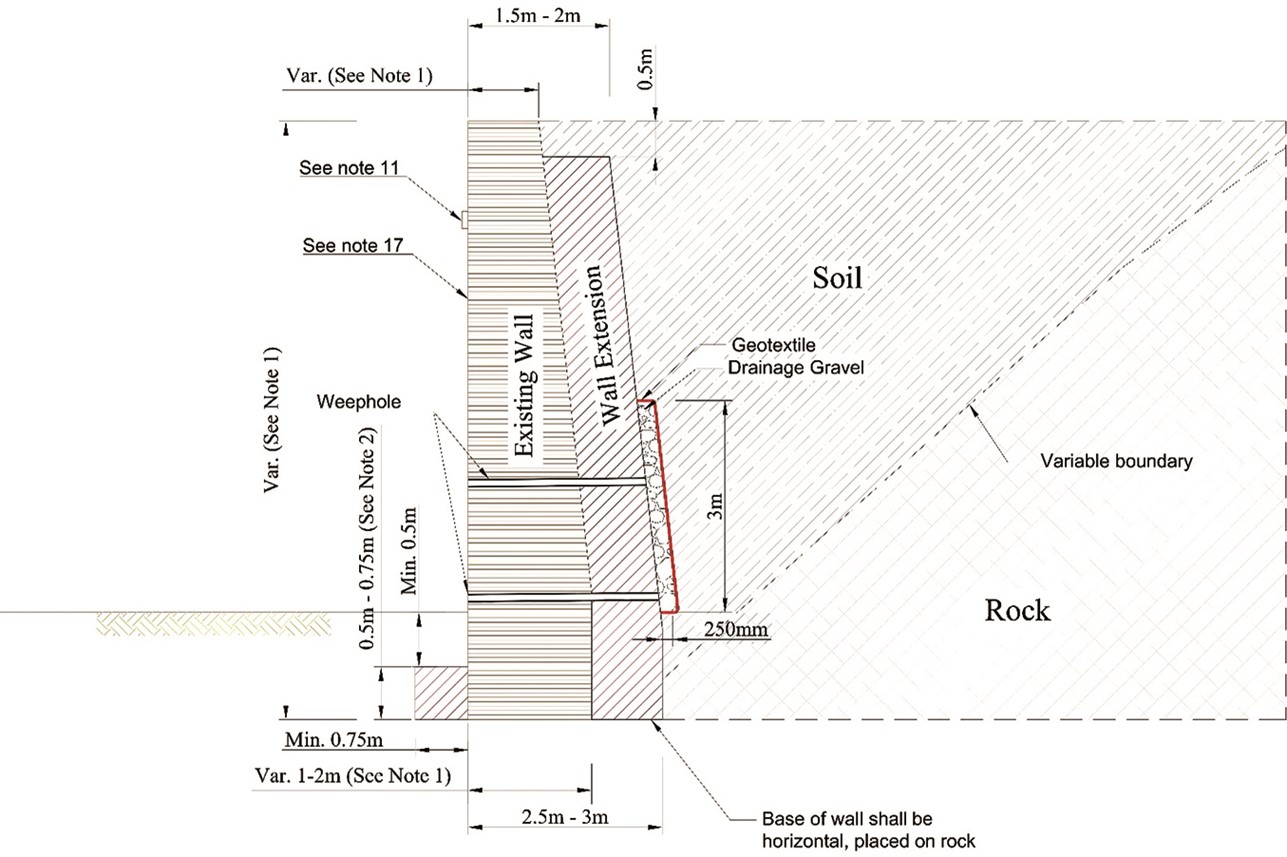